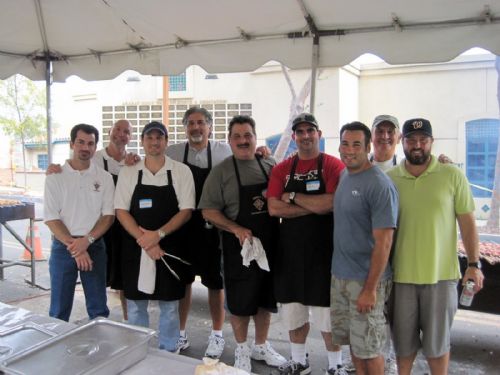 Two things immediately noticeable at this year’s September 25, 2011 Ararat Home Picnic in Mission Hills, CA were the good weather (it wasn’t hot) and the appearance of the new construction project taking shape at the north end of the property. After months of planning, Michael Surmeian led his volunteers with great enthusiasm and energy as he chaired the picnic for the third consecutive year.

Shuttle service from adjoining properties where visitors parked was provided by members of the Knights of Vartan Sevan Lodge. As always, the Triple X and Triple X Juniors worked at food & drink stations, sold tickets, ran children’s games, and barbequed shish kebab. Parking control was assisted by Students of AGBU Manoogian-Demirdjian School of Canoga Park. The doors were open from 11:30 a.m. to 6 p.m. A few of the older volunteer workers remembered six decades of service to the Home. Others were serving for the first time.

Picnickers came from near and far. The traditional shish kebab dinner was dished out, complete with salad, bread, cucumbers, and rice pilaf. Side dishes such as yalanchi sarma, souboureg, and other specialties were also offered. Drinks were sold separately with John Casparian managing the drink stations. The pastry booth was operated by members of the Ladies Auxiliary chaired by Dianne Ohanesian. Jenny Kurkjian could be seen cashiering for hours. Thanks to the Westside Ararat Guild which helped prepare khadayiff and every Guild that donated pastry. Alongside the pastry booth a new station was added this year… the Armenian Coffee Station with Debbie Avedian in charge.

The 245-seat Sheen Memorial Chapel and the Ararat-Eskijian Museum filled with its cultural and historic treasures were open to visitors throughout the day. The chapel serves the spiritual needs of the residents and is often used for weddings, baptisms, and funerals.

On the outdoor patio adjacent to the ballroom, a wood dance floor had been installed to protect the Herb Tertzag Courtyard and allow for Armenian folk dancing. The Najarian Ensemble was well received. The Ara dance group provided lively entertainment for the audience. Cash prizes donated by the Armenian American Middle East Club, Triple X of Los Angeles, Triple X of Orange County, Triple X of Palm Desert and Jr. Triple X were raffled as well as a trip to Hawaii won by Harold Kassarjian of Studio City. Donations toward defraying expenses were received from the Hai Benefit Circle, Knights of Vartan Tri Lodges and many individual and corporate sponsors.

The Ararat Home and Ararat Eskijian Museum located at 15105 Mission Hills Rd., Mission Hills, CA (818) 365-3000
may be visited on-line at www.ararathome.org and www.Ararat-eskijian-museum.com. The new Mission Hills project will replace the Eagle Rock facility and will accommodate 58 beds in a two-story addition to the current 198-bed skilled nursing facility. It is scheduled for completion in two years.